Peter and six of the other disciples have gone back home to Galilee.  They go fishing and catch nothing, a metaphor for returning to life as they have previously known it, even in the wake of resurrection.   In Jerusalem, Jesus had come to them Easter evening, penetrating their “entombed ” state (John 20:19-31) , offering them his peace and sending them as he had been sent.  He returned eight days later and spoke to Thomas, communicating that the spirit enlivening the disciples’ ministry is available through more than just his physical presence.  Yet the “rising power” has still not been realized within them.

A new dawn arrives, offering at first only wrinkled brows.  Another day in a world defined by scarcity.  Jesus calls to them from the shore,  offering them another way.  A different manifestation of Jesus fills their emptiness, and they do not recognize him at first.  Their prompt response may be more a matter of deep hunger rather than “obedience.”  Nevertheless, they do respond, and the catch is startling, filling the boat.   The beloved disciple says to Simon, “It is the Lord!”   If this is Lazarus, it is no wonder that he recognizes the astonishing flow of new life!

Simon Peter is powerfully moved, quickly putting on clothes and jumping into the water.  This is touching comedy:  Deep love, relief, and enacted longing mix together with an earnest crawl stroke.  And perhaps there is a gentle reminder for us that it is possible to come eagerly to Jesus while still neglecting to bring all we have been given.

The rest of the disciples drag the enormous catch to the shore.  Upon arrival they see a charcoal fire, with fish on it, and bread.  For Simon Peter this is a particular summons, as he recalls the last charcoal fire that he stood by.  The chill of the air in the high priest’s courtyard returns;  Peter recalls the look in Jesus’ eyes as they met his, and the panicked sensation in his gut with each insistent inquiry, ” “You’re one of them, aren’t you?”

When Jesus directs the disciples to bring some of their catch to the feast  already being prepared, Simon Peter is characteristically out front.   The haul is huge but has not torn that which holds it, like new wine in supple wineskins.  Is this a sign of renewed promise for Simon’s life?

Jesus invites them all to this emerging table of resurrection blessing and they come, suspended in their “yes-but-don’t say” state.  They share an abundance that includes new provision, the fruit of their own labors,  and even  the echoes/memories of a painful past, soon to be transformed.  Jesus breaks and shares the bread as he has done before. The wine is their common vocation freshly revealed.  David Ewart calls this the “first breakfast.”

Once they are fed, Jesus engages Simon Peter directly: ” “Simon, son of John, do you love me more than these?”  “Simon, son of John” is the man whom Jesus called out of a fishing boat some time ago.  In addressing his disciple this way, Jesus is referencing the origins of their journey while accessing  the fuller history that has been lived out together since then. The story continues to be written in real time.

Note the rivalristic language of the question:  “Do you love me more than these?”  What is Jesus touching on? Perhaps it is his friend’s deep need to always be first, “out front” in a demonstrative way, an m.o.  that can lack reflection.  The irony is that active love, agapao, cannot be the product of rivalry.  For Peter, this painful attention is quite helpful. Because even if he did repeatedly deny his connection to Jesus in the urgent scene of the courtyard, the reason Peter had the opportunity in the first place was because he “showed up.”  It was Peter who went to the high priest’s house and risked identification.  This is not lost on Jesus.  It is all being gathered together, re-membered, here on the shoreline.

“Yes, Lord, you know that I love you.”  Jesus says, “Feed my lambs.”  Nurture my young ones.  Prepare them “breakfast.”

A second time, Jesus asks, “Simon, son of John, do you love me?”

“Yes, Lord, you know that I love you.”  Here the Greek text employs phileo, the love of deep friendship. In response to an invitation to agape life, Peter pledges a fraternal love. This is no small expression; in the Upper Room Jesus had declared that Peter and the other disciples were his friends, ands there was great intimacy and understanding in such relationship.  If the text is trying to convey Peter’s grappling with the unbound nature of Jesus’ love, this is a hopeful and promising struggle, full of opportunity.  There are no brash statements about his capabilities made here.

“Tend my sheep.”  Peter will be a shepherd, Jesus says.  This is not something Peter would have felt capable of as the sun rose on this new day.  But honest encounter is taking place; wounds are being tended to, perceived barriers removed. There will be  new understanding, without rivalry, of his relationship with the others.  And a new scope of attention.  In my recent workshop, one of the participants offered a particularly vivid translation of  Jesus’ commission:  “Take care of the people who crucified me.”

A third time Jesus asks, “Simon, son of John, do you love me?”   This time the Greek text has Jesus also using phileo.  He meets Peter where the disciple is, speaking his language.  He also draws forth the deep, unspoken pain his companion continues to feel about his previous failure.  Has Peter’s denial obscured or distorted the substance of his relationship with Jesus?  The answer is no, and Peter banks his life on it. “Lord, you know everything; you know that I love you.”  Love is being considered, asserted, acted out in a context where everything is known.

“Feed my sheep,” Jesus says.  It is a commissioning, a deep entrusting, a recognition and affirmation of who Simon Peter is; the whole of who he is!  He is more than just “Simon son of John;” he is more than the disciple who needs to get ahead; he is more, much more, than the “Denier.”  Yes, these are all part of his lived experience.  But none is a barrier to fullness of life; not any more.  There is a rising being made manifest.  Jesus walks Peter through the denial; its memory, its substance, its ramification.

In the Upper Room,  Peter had asked Jesus, “Lord, where are you going?” (John 13:36)  Jesus had answered him, “Where I am going, you cannot follow now.  But you’re going to follow later.”  Peter had protested, “Teacher, why can’t I follow you now?  I’ll lay down my life for you .”  And Jesus said, “Will you lay down your life for me?  I’m telling you seriously; the rooster won’t crow until you’ve denied me three times.”

Now, on the seashore, they look into each other’s eyes again.  It hasn’t been that long since they gathered for the Passover meal, but there has been a lot of living, dying, and living again since. The time that Jesus had been pointing to has arrived. “I’m telling you very seriously: When you were younger, you used to tie your belt around your waist , and you’d walk around wherever you pleased.  But when you’re old, you will stretch out your hands, and someone else will tie you up, and they’ll take you where you don’t want to go.”  There is a pause where John’s narrative adds, “Jesus said this to indicate the way Peter would die and bring glory to God.”  Then Jesus opens wide the door to a future that didn’t seem possible an hour before.   “Follow me.”

Peter’s life is no longer captive to his fear in the courtyard,  the shame that had once sealed him in a locked room, or the frustration of fruitless labors.  He is realizing God’s “rising power.” 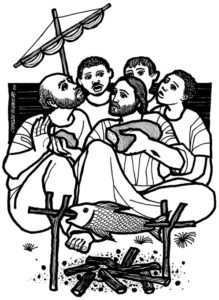 (Many thanks to the folks at Chalfont for our life-giving exploration of this story!)