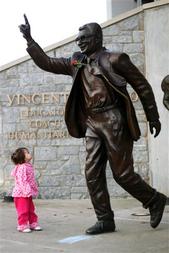 “Forgiveness is a particular kind of love that seeks the best for another even when seeking to hold them accountable . . . Forgiveness is a sign that you have come to realize who you are.”  —Nelson Johnson

My initial memory of Joe Paterno is from December 1967.  He was 41 years old, in his second year at the helm of Penn State football, and coaching his first bowl game.  The Nittany Lions blew a 17 point halftime lead in the Gator Bowl, finishing in a tie with Florida State.  I remember the young coach weathering considerable criticism for the team’s second half collapse, with little negative impact.  In those early years, Paterno developed a reputation as a coach who understood that life was about more than football, something he enjoyed reminding the press of.

The 84 year old man we recently saw addressing students outside his home seemed to have lost such perspective, reveling in their adulation and urging them to look forward to the upcoming Nebraska game, even as he failed (perhaps refused) to grasp the awful ramifications of the child-abuse horror only now seeing the light of day.

A lot has happened for him since those early days: a total of 409 wins; 2 national championships; a reputation for Penn State of being a program with a higher standard of ethics;  the turning down of a number of pro offers; a remarkable 46 seasons as head coach. The legendary “JoePa”  was the public face of Penn State to generations of students  and fans; he was the celebrated king of a place called “Happy Valley.”

The sudden collapse of it all, only a matter of days after his setting the NCAA record as the winningest coach in history, remains shocking, though clearly necessary.  The children and their families– those wounded horribly by the abuse of Coach Sandusky and further crushed under Penn State’s spiritually violent denial (spanning as much as two decades)–are finally visible and being given voice, as the trappings of repression have come crashing down.  Only now can justice really begin to be addressed; and it will happen in an environment where the familiar order and its system of meaning are in chaos.  Among other things, JoePa is no longer head coach, having been fired, his efforts at authoring his own retirement soundly rejected. While Paterno was not the perpetrator of the abuse, he is culpable in the compounding and multiplication of injury; and even as his actions met the minimal legal requirements he failed badly as a human being and as the ” educator, coach, humanitarian” that his monument at Beaver Stadium proclaims him to be.

In a previous post I highlighted the steps in a process of forgiveness as proposed by L. Gregory Jones.  While his is one articulation among many, Jones’ steps can help us to think about how forgiveness might be practiced, and realized, with Coach Paterno and the larger Penn State community.  I like Jones’ work, as he believes that “the Christian practice of forgiveness involves us in a whole way of life, a way that is shaped by an ever-deepening friendship  with God and with other people:”

1)  We become willing to speak truthfully and patiently about conflicts that have arisen.

2)  We acknowledge both the existence of anger and bitterness and a desire to overcome them.

3)  We summon up a concern for the well-being of the other as a child of God.

4)  We recognize our own complicity in conflict, remember that we have been forgiven in the past, and take a step of repentance.

5)  We make a commitment to struggle to change whatever caused and continues to perpetuate our conflicts.

6)  We yearn for the possibility of reconciliation.

The first point is foundational.  Many people confuse forgiving someone with excusing their behavior.   Quite the opposite is true.   Consider God’s for-giveness: in it we face the judgment of God’s self-giving love, a power that even in embracing us lays us bare like no other. For communities seeking to image God’s forgiveness, fidelity to the truth is a commitment of the highest order.  To honor such a commitment necessitates the recognition that we must “become willing” (this is not easy for us!) and that the discipline of patience (enacted in careful listening, reflection, dialogue, and the humility of learning) is essential.    In human relationship, the practice of forgiveness becomes necessary precisely when something is inexcusable. What has happened at Penn State is clearly inexcusable, at multiple levels.  Practicing forgiveness with Coach Paterno means laying aside excuses (“Joe didn’t do anything wrong”) that dehumanize the victims all over again and, quite frankly, hold Paterno in low esteem.  Practicing forgiveness with the Coach means acknowledging that he is a far more capable and compassionate person than he has demonstrated here, and expecting him to rise to such expression in the midst of this disastrous situation.  He is capable of contrition, and it is called for.

Engaging the second point needs to begin with opening to the woundedness of those who have suffered victimization. It is their anger, bitterness, and open wounds that hold priority here. Acknowledging the scope of the pain and injustice is itself a gut-shot, breathtaking in its demands.  Yet this must be engaged as fully and honestly as possible, for as long as necessary.  Only through a vulnerable and honest process can  the potential for healing be encouraged and affirmed, integrity established, the legacy of  betrayed trust give way to a different future, compassion and learning be applied.  This includes Coach Paterno, who though he has been fired as head coach is very much a part of  not only the institution but of the Penn State community.

It is with point three that I would like to revisit Nelson Johnson’s quote: “Forgiveness is a particular kind of love that seeks the best for another even when seeking to hold them accountable.”    Over nearly half a century, a great deal of love has been proclaimed for Joe Paterno.    Many players have cited him as a kind of father-figure, instrumental in their growth.  He has received numerous awards, been the object of great fame and attention, been extolled as an example for others, and has been inseparable from the school and community that he has served.  Now he is shamed.  In the face of the scandal, students rallied to Paterno’s defense.  When he was fired, many protested, some even rioted, overturning a TV van.  The rioting was more about betrayal and loss of illusion than it was about love.  It would have been a travesty for Paterno to coach the Nebraska game.  Nevertheless, the shouts of  “One more game!” did convey a measure of sensitivity and care for the coach.  “It’s a tragedy , everything that has happened,” said one student; “But we support JoePa.  JoePa is a part of Penn State.”  There is something important in that sentiment.  Love is an expression of relationship.  Forgiveness is a particular kind of love.    If Joe Paterno has indeed been loved over the decades, rather than adored for all his winning, then that  love is deeply necessary right now. Forgiveness is loving Joe enough to express anger and deep disappointment in his behavior, while refusing to abandon him, and making room for him to act differently moving ahead.  Honoring the fullness of a shared story, particularly during times of pain and failure, is the substance of forgiveness. Present and former students have taken the lead in demonstrating the priority of the victims. How JoePa responds will be up to him.  However, it is not hard to imagine his deep longing to cherish anew the depth and texture of more than six decades of life in State College and all that history holds, including, one hopes, the realization of lines crossed blindly and the damage done. It is the grace of an open ear.  This narrative need not end in amputation.

While the Big Ten vainly imagines it can scrub its previously beneficial ties to the Coach away by removing his name from their championship trophy,  at Penn State rumors that the Paterno statue might be removed from campus have been revealed as premature.  In a Christian sense, it would be far better to be able to behold the statue communally and consider its lessons, much as the disciples and Jesus once stood before the fig tree.  And to recognize that when God claims our history, and the power of forgiveness is applied, meanings change.  What might institutional repentance look like?  One wishes that the Board of Directors would have initially moved to cancel the Nebraska game, even to consider the suspension of the rest of the season, in the recognition of the magnitude of human need to be addressed here.  The full attention of the school would have been itself a sea change.  I say this recognizing the already backbreaking nature of those anguished deliberations.  To cancel part or all of the season would have threatened vested interests and brought the distorted, idolatrous role of athletics (and believe me, I am a fan) into everyone’s consideration. Forgiveness as a way of life necessarily authors new economy.    Nothing about this is, or will, be easy.  As I write, the Penn State football team is beating Ohio State in what would normally have been treated as a huge event.  That it is not is a mercy.  A hundred such victories cannot provide the “feel good” experience many of us grasp for.   The familiar order, the systems of meaning, the way of life must change.  The practice of forgiveness is always tied in a primary way to the receiving of forgiveness.  And not just at Penn State University.  The commitment to struggle to change will acknowledge a common future.

There will be no bookend game in my  memory of Joe Paterno’s career.  But forgiveness for Joe has never meant that he gets to coach again. He is more than that. Perhaps JoePa can recover his understanding that life is about more than football. Reconciliation might mean all of us releasing Joe from the captivity of that statue and the projections that he has labored under.  And being released ourselves.  Perhaps we can all be agents of healing. Forgiveness can be a sign that we have come to realize who we are.