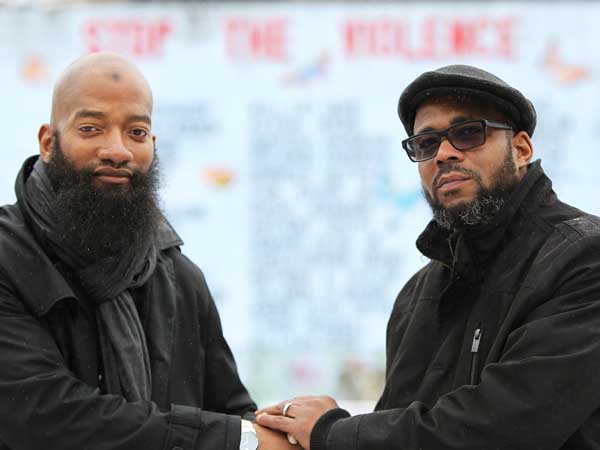 When  is “the time fulfilled” with forgiveness? And what is its “holy ground?” The painfully honest, deeply hopeful story of Lamont Hatton and William Little shared in the Philadelphia Daily News several weeks ago (After 20 years) offers us access for exploring these questions in some depth.  It is a story to be attentively received; and pondered.  Let’s examine the power  at work in the lives of these two:  one, a killer who after a decade in prison returned home to engage a new way of living; the  other, a person who had wanted to to take revenge on his brother’s killer for more than two decades  but instead confronted him with forgiveness.  Must there be a specific time and place to forgive?

In March of 1989, two groups of teenagers from the same South Philly neighborhood got into an altercation at a local skating rink, with guns being drawn.  William Little was in one group.  Terrence Brice, the brother of Lamont Hatton, was in the other. When Brice’s group left, the crisis seemed to have dissipated.  But when the other group came outside, gunfire erupted toward them from across the street.  Little drew his 357 magnum and fired back, striking and killing Terrence Brice.  Eventually, he was arrested by police, convicted of third-degree murder, and sentenced to ten years in prison.  While he was in prison, Little heard that Brice’s brother, whom he didn’t know, was intent on avenging his sibling’s death.

Little emerged from jail ten years later, returning to the same South Philly neighborhood.  He began cutting hair in a local barbershop.  From the depths of  his own experience, he  spoke out publicly against guns and violence. The man who had once had the attitude, “Kill me or I’ll kill you, I don’t care,” was walking a different path in the very same territory. He began to mentor young people, preparing them to make different choices than he had.

But the desire to even the score continued to burn within Lamont Hatton, who  asked: “Why is this man alive when my brother is dead?” Hatton began to shadow Little, even entering the barbershop where he worked.  Little, who had expected death in the wake of the 1989 killing, wasn’t aware of how closely it stalked him now.

But the very proximity that was offering Hatton a chance to kill Little was also affording him radically new perspectives and experiences of his enemy.  As he followed, Hatton witnessed the dramatic changes in Little, especially his impassioned dedication to the salvation of young men  from South Philly and other neighborhoods around the city.

We can only imagine the intensity of Little’s transformation over that decade in jail, and the struggles it entailed;  the Daily News article does not address this narratively. But Little’s new life is his testimony.   And his newfound presence became a source of emotional persecution for Terrence Brice’s brother. Surely, no one could fault Hatton for the bitterness that threatened to consume him.  It is not uncommon for one who has been wounded by injustice to continue to suffer even after a perpetrator has engaged  a process of repentance.  But could Little’s transformation also become a source of hope for Lamont Hatton?

Very critical to this struggle for deliverance was the role of Charles Hodge, close friend of Hatton and co-worker of Little.  It was Hodge who began urging Hatton to consider that there was an alternative: he could forgive Little.  As Hatton’s inner struggle intensified, he increasingly relied on his friend, with whom he could own his pain and articulate the power it held.  Eileen Borris has noted that forgiveness is often of a triadic nature, suggesting that “we may need an outside ‘third’ factor which enables us to step out of one system of thinking based in fear and guilt to a new system of thinking which allows us to see the world differently.” Borris says that the the “third factor” may be a specific element of strength, faith, or trust  which offers us new freedom (Borris,The Healing Power of Forgiveness, 2003). Or it could be person who manifests those qualities.  Charles Hodge willingly became a third partner in the process and a source of such strength, faith, and trust. He enacted the role of community.

However, it was not inner peace that the anguished brother experienced for quite some time.  Dan Geringer, the author of the Daily News piece, writes: “On and on the battle between the street code of a life for a life and the Christian teachings of mercy and redemption raged within Hatton . . .”  There are many of us who can identify with the mathematics of retribution; we have been drilled in it since shortly after birth. “An eye for an eye and a tooth for a tooth” is not just the street code of the inner city, but remains the dominant equation for “justice’ in our culture, and even among many in our faith communities.  But Lamont Hatton was studying the Sermon on the Mount in real time, thanks to his friend , his deeper self, and a source of inspiration he discerned in both.

Hatton says, “With blessings from God, I needed some peace.  I prayed to have closure and for a way to forgive this brother.  I was getting tired of seeing him and having a hatred for him . . . God did this.  He got tired of seeing me suffering.”

When Hatton entered the barbershop and spoke words of forgiveness, Little didn’t understand what was happening at first. But what was offered opened the space for him to apologize.  Forgiveness was a gift for both. The neighborhood of pain was now realized as holy ground.

So, must there be a specific time and place for forgiveness? What do you think?  When is this power at work in your life and where is the holy ground??