The Conspiracy of Goodness 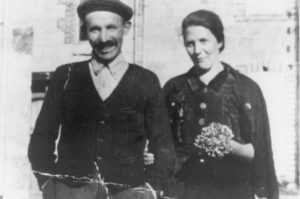 “How could the Nazis ever get to the end of the resources of such a people?” –Pastor Andre Trocme

On a Saturday afternoon in late summer of 1942, police in Nazi- occupied France arrived in the southern French town of Le Chambon-sur-Lignon with several empty buses.  They demanded that the pastor of the town’s French Reformed Church provide a list of the names of Jewish refugees and direct those people to the town hall for “registration.”  Pastor Andre Trocme refused, even when threatened with arrest.  His motivation was clear: “These people came here for help and for shelter. I am their shepherd.  A shepherd cannot forsake his flock.”  It was but one instance in what  those receiving refuge called “an extraordinary outburst of solidarity.” But  Trocme’s powerful witness cannot be separated from all the remarkable people among whom he lived and served.  It is estimated that during the Second World War, the town of 5,000 sheltered as many as 5,000 Jewish refugees.  Family after family offered space and welcome to those in need. The local education system was shaped to receive the many children arriving; in  short time, it was full of Jewish children.  In fact, the town became known as a “village of children.”

Le Chambon’s story has been written about in Philip Hallie’s 1979 book, Lest Innocent Blood Be Shed.  However, it is from Pierre Sauvage’s 1989 documentary, Weapons of the Spirit, that I have received this story most deeply and personally.  Sauvage was born there in 1944 to parents who had found refuge among the Chambonnais.  He marvels at being born in Europe in the midst of the Holocaust  as a Jewish child among a people “uniquely committed to my survival.”  In Weapons of the Spirit, Sauvage documents his return in the 1980’s to Le Chambon to talk with the townsfolk whose “Conspiracy of Goodness” had practiced a radical, life-giving hospitality rooted in their faith.   Everywhere he goes, he asks “Why?”  To watch the movie is to hear the people’s warm voices and see their gentle faces as they humbly take issue with the notion that they engaged in extraordinary acts.  Georgett Barraud, whose boarding home for school children and summer guests expanded to receive countless “guests in need,” speaks for many as she says, “It happened so naturally we can’t understand the fuss.”  Sauvage also receives and honors the stories of  the people who, like his parents, found shelter and belonging in this powerful expression of God’s realm.

Forgiveness is the power of liberation:  receiving, giving, and celebrating  new life even in the midst of death’s darkness.  The people in Le Chambon behaved as liberated people.  Though France was not militarily freed by the Allies until 1944, Sauvage notes that “Le Chambon had never ceased to be free.”  And that freedom had a profound impact on the lives of others.

(1) This is what it looks like when people of faith (a) honor God’s primary claim on our lives (b)  speak and act with a new truthfulness (c) live with one another in a new, inspired way.*  The citizens of Le Chambon manifested a whole way of life rooted in God’s love for all and powerfully expressed in love for one another.  Throughout the film, you hear the people “re-membering,” and their incarnational witness repeatedly interrupts the cycles of violence and diminishment. Daily life as sacrament. Their movements of conscience are both individual and communal.   Protestants from the Huguenot tradition drew strength from the common memory of their ancestors’ faith witness through persecution and efforts to exterminate them in 16th century ( a time they biblically referenced as “The Desert”), celebrating the faithfulness of God who provided the leadership and sustenance they needed. These descendents experienced in every challenge “an echo of their forefathers’ struggle and faith.” They received the present-day sojourners as kin.  “What happened had a lot to do with people still believing in something .  The Bible says to feed the hungry, and visit the sick.  It’s a normal thing to do.”  Independent Protestants who did not attend Trocme’s congregation nevertheless held common understandings and acted as one with them.   As one woman says, “We acted because they (their Jewish brothers and sisters) are the People of God.”  All were understood as being part of the flock.

(2) The Christian life of love and for-giveness was assertive and disciplined. Trocme and fellow pastor Edouard Theis had offered a sermon  in the wake of  the French government’s surrender to the Nazis in 1940, and the Vichy regime’s agreement to arrest and deport to Germany any refugees that the German government might demand: “Tremendous pressure will be put on us to submit passively to a totalitarian ideology.  If they do not succeed in subjugating our souls,  at least they will want to subjugate our bodies.  The duty of Christians is to use the weapons of the spirit to oppose the violence that they will try to put on our consciences.  We appeal to all our brothers in Christ to refuse to cooperate with this violence . . .  Loving, forgiving, and doing good to our adversaries is our duty.  Yet we must do this without giving up, and without being cowardly.  We shall resist whenever our adversaries demand of us obedience contrary to the orders of the gospel. We shall do so without fear, but also without pride and without hate. ”  The pastors’ leadership awakened and encouraged what was already deep within the fold.

(3) Young people were nurtured in these ways, and even assumed leadership .  When the government sent their cabinet Minister for Youth to Le Chambon, his cry of “Long live Marshal Petain (Vichy President and Nazi collaborator)” was met first with silence and then with the cry, “Long live Jesus Christ!”  He was approached by a group of young people who handed him a letter and asked him to read it immediately. In it, they criticized the recent roundup of Jews in Paris and declared that they, the young people of Le Chambon, refused to make distinctions between Jews and non-Jews and would act to hide anyone the officials were seeking to arrest and deport.

(4) The faithful actions of the people were imaginative and creative.  One of the refugees was a master at forging documents and was able to continue this critical enterprise under the noses of German and French officials because his host, a humble farmer, hid the documents in his beehives and later at his mother’s grave.  When the two pastors and the school’s headmaster were arrested and taken to a detention camp, they were surprised and delighted to find that the toilet paper they were given as they were taken away was inscribed with Bible passages to sustain them.

(5) There was a deeply evangelistic and transforming quality to the movement in Le Chambon.   Both Sauvage and Hallie note that even among those clearly identified as “the enemy” were people who seemed drawn into the effort. The Prefet, the highest government official in the area responsible for implementing Nazi policy, interceded to get the pastors released from jail and underreported the number of Jews in official reports. There is evidence that both French and German officials had substantial knowledge of what was happening in Le Chambon, but did not act as expected.   “Could it be that you just never  know who would get caught up in the conspiracy of goodness once it has begun?,” Sauvage asks.  The faith of God’s people in this small town was not only a force for deliverance in the lives of the persecuted; this faith was also  intercession and prayer for the enemy and their humanity.

(6)  The people of Le Chambon revealed a new reality.  As a teacher of forgiveness and nonviolent peacemaking, I am regularly challenged about the efficacy of such practices: Isn’t violence necessary,”realistic,” in order to battle violence and injustice?  In his subsequent book, Jesus and the Nonviolent Revolution, Andre Trocme wrote: “People say, ‘Our nation is about to be exterminated; or the future of our civilization, of our moral values, of true religion, is threatened; or yet, our institutions violate human rights to save human rights, we must temporarily forget our scruples and use violence, sacrificing men to destroy unjust structures, and thus saving the poor from oppression.’   For centuries both progressive and reactionary camps have been ‘temporarily’ choosing violence, ‘temporarily’ shedding the blood of millions of victims in the name of a better future. Because each side speculates about ‘what would happen if we let the enemy win,’ they mercilessly sacrifice man, whether friend or enemy . . . And every generation is faced with new options time after time considered to be so important that it purportedly believes itself compelled to use violence.”

Le Chambon is the alternative, in the flesh.  Their life together is a confession. Colman McCarthy has written:  “By defending themselves with love, the strongest weapon of the spirit, the Chambonnais gave the Nazis no relief.”   But their witness was more than a defense.  Daniel Trocme, the pastors cousin who adminstrated youth homes and who died in a Nazi concentration camp,   said that “Le Chambon is a contribution to the reconstruction of the world.”  Every time Pierre Sauvage asks “Why?,’the people of  Le Chambon-sur-Lignon respond, “Why not?”

McCarthy, Colman.  “Nonviolent Weapons of the Spirit” in Strength Through Peace.  The Center for Teaching Peace.