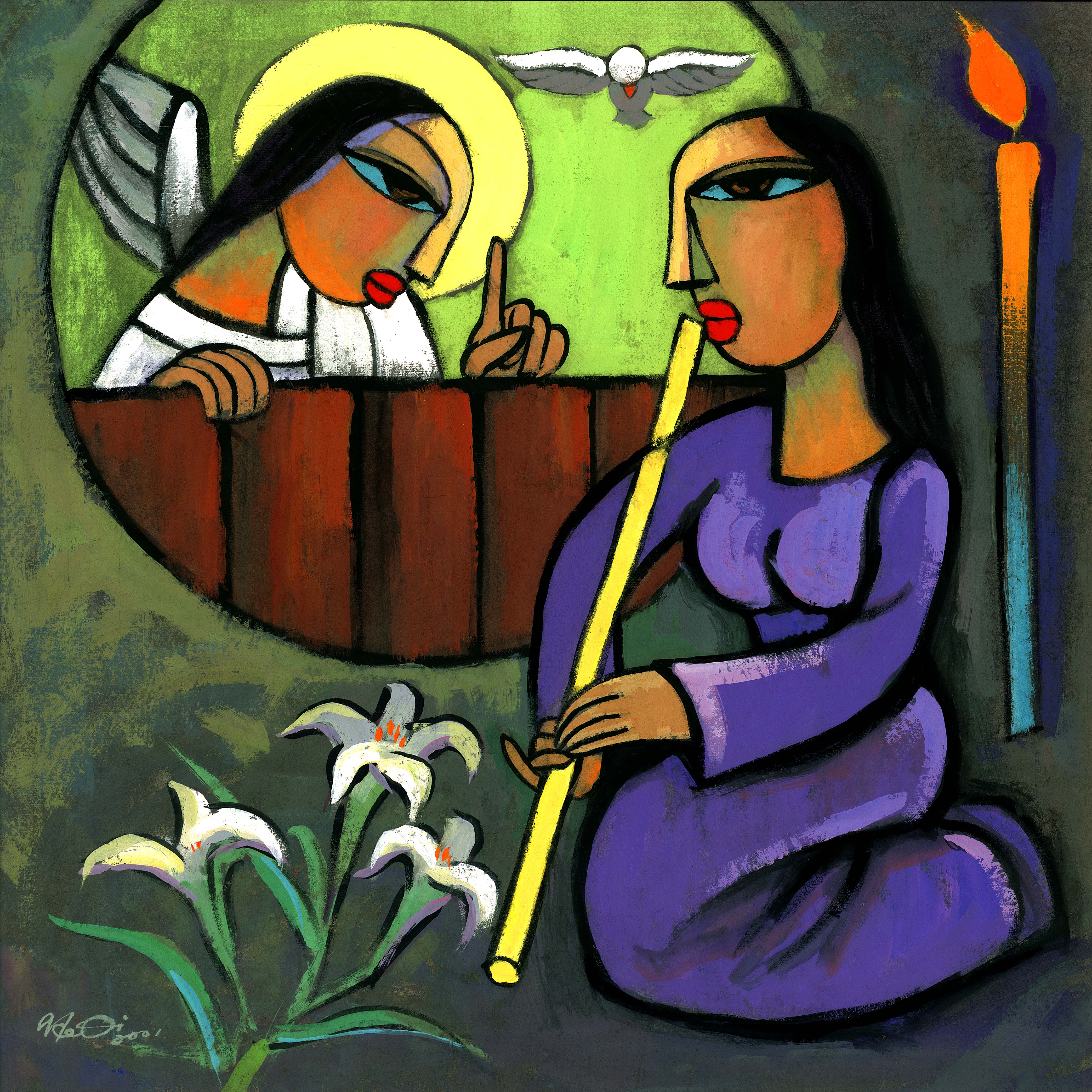 The God revealed in this story is the One who gifts unreservedly, who loves without negotiation, who indwells, who makes space for new life where space has not been perceived (or has even been prohibited), who links our lives inseparably with everyone else’s, who nurtures, who astonishes us with the invitation to welcome fully God’s emerging future, and who anticipates us being an integral  part of that future!

The season of Advent reminds us of God’s remarkable initiative, freshly stirring us to consider dimensions of God’s saving grace and what it means to be on the receiving end.  The life of Jesus is God’s gift to us.  It is not shaped by human demands; rather, its definition flows from who God is.  We are talking about God’s for-giveness here:  God’s power to liberate, to unburden, to remove barriers, to lift up,  to gift, and to open new futures not bound to the past.  During Advent, the preacher is released to explore a gracescape.  God is breaking into the dominant flow of human history.

The birth narrative in Luke illuminates God’s life-giving, subversive ways. “Hello, favored (gifted) one,” the angel greets the startled young woman; “The Sovereign One is with you.”  Young Mary of Nazareth has life as she has known it interrupted by God in a way perceived until now as “inconceivable.” God is with her !  The giving is manifested in more than divine proximity.  Mary will carry God’s promise for the world within her, nurturing and nourishing that promise, then bearing the Living Word into the world God so loves.  This is deeply imaginative territory.

Before Joseph (her betrothed) or anyone else is aware of what God is doing, Mary is being graced in terrifying wonder.  Hers is a place of vital importance in God’s realm, a realization that astonishes her.  Her life until now has been buried under the weight of what the world has been willing to give and to take.  The limited future that has been “possible” is one that has been prescribed and has required the authorization of others.  Conversely, this startling rush of give-ness reveals Mary’s identity and value as bestowed by God.  It reveals her, and the possibilities that her faithfulness and deep humanity bring to the cosmos.

Even as we ponder these blessed details, let us not fail to acknowledge that the stunning, overturning, up-rising nature of God’s deliverance for the whole world (listen to Mary’s Song in 1: 46-55) begins very personally within her life. “Don’t be afraid, Mary,” is the recognition that this humble young woman has her wits about her.  What God is authoring will be nothing less than scandal to the world in which she exists; and that which is life-giving and saving for that same world will unfold in a vulnerability that puts Mary in tremendous peril.  Let me ask:  Is this not how grace is realized in the world?

The God revealed in this story is God who gifts unreservedly, who loves without negotiation, who indwells, who makes space for new life where space has not been perceived (or has been prohibited), who links our lives inseparably with everyone else’s, who nurtures, who astonishes us with the invitation to welcome fully God’s emerging future, and who anticipates us being an integral part of that future.

Even so, it is with trepidation that I suggest that Mary is being gifted with liberty to act beyond fear and coercion, out of her own faith, her experience of defining relationship with God.  Yes, it is clear that God is granting a freedom that the culture and the local house of worship do not afford her.  God’s declaration of her new location necessarily dislocates countless other plans.  I’m not sure the word “radical” can do full justice to what we witness here.  Nevertheless, the world’s deck remains stacked against her, at least in traditional terms.

This is the irrational season

When love blooms bright and wild

Had Mary been filled with reason

There’d have been no room for the child.

L’Engle’s poem emphasizes what follows God’s action, what comes after the annunciation.  This is the territory of receiving, and response.  How will Mary claim her redefined life?  In what ways is she intent about offering hospitality to the life God gives?  How does Mary move into the new space that God has declared?  My earlier trepidation came not from any doubt of what God is doing nor from limited perceptions of Mary’s capability; rather, it is from  my reluctance to be telling Mary how she “should” respond to God’s initiative.  After all, the free gift frees.  For those of us venturing to preach from this text during Advent, it will be critical to seek the testimony of people who have encountered such life-shaking annunciation themselves, who have stood next to Mary and occupied a similar location.

This year I have been spending time sitting with another poem, Denise Levertov’s Annunciation, which begins like this:

We know the scene: the room, variously furnished,

Arrived on the solemn grandeur of great wings,

the angelic ambassador, standing or hovering,

whom she acknowledges, a guest.

But we are told of meek obedience.  No one mentions

did not enter her without consent.

to accept or refuse, choice

of one sort or another

enact them in sullen pride,

when roads of light and storm

open from darkness in a man or woman

are turned away from

in dread, in a wave of weakness, in despair

God does not smite them.

But the gates close, the pathway vanishes.

she did not quail,

took to heart the angels’ reply,

the astounding ministry she was offered:

to bear in her womb

Infinite weight and lightness; to carry

nine months of Eternity; to contain

in slender vase of being,

the sum of power–

the sum of light,

Then bring to birth,

push out into the air, a Man-child

but who was God.

This was the moment no one speaks of,

when she could still refuse.

Perhaps the term heurisko in Luke 1:30, translated “found” (“You’ve found favor with God”), can be helpful.  My Greek lexicon defines heurisko as: (1) to learn something previously not known, frequently involving an element of surprise (2) to learn the location of something either by searching or by unexpected discovery.  The first definition resonates powerfully with this story, as does the reference to “unexpected discovery,” especially when the location you discover is your own!

–having us “find our voice” in the midst of a key relationship or a critical situation;

–discovering gifts we did not realize were part of us;

–coming to embrace a vocation we would never have imagined on our own;

–having our eyes and ears and hearts opened to perceiving new location and possibility;

–risking for-giveness with someone else as an outgrowth of God having drawn close to us;

–living beyond ourselves, in countless ways, with the knowledge that we are not alone;

–accepting  that God has chosen to tend the world’s wounds in working through us.

—“How will this be?” (1:34) is the honest articulation of what it means to grapple with the dimensions of new life–unboxed and no longer lived in a straight line.

–Her profession of faith (1:38), “May it be with me according to your word,” follows her fresh statement of self-understanding. The personal, social, and political landscapes have been radically reordered before Mary even takes a physical step.  She is living in a new world, in the very midst of Nazareth’s stale air.  The Christmas story says that what faith is really all about is accepting God’s trust in us!

–Mary subsequently travels south to her cousin Elizabeth’s home to find community (1:39).  This may be a signal that Joseph did initially “dismiss her quietly.”  It is anything but a final word.  Rather, the story takes new shape and body because of how things have unfolded.  In this case, resistance and abandonment contribute to making the next chapter possible.  And all of this before a visible birth.

–With each movement, Mary “makes room” for the embodiment of new life.

These first steps are both audacious and humble. They are good encouragement for us in the midst of the Advent season.  We behold Mary receiving, responding, her eyes and ears fully open, her spiritual legs getting stronger beneath her, labels of subservience and illegitimacy being washed away by God, her life becoming good news for the poor, even as her head spins and her heart hurts. Having her wits about her in God’s realm means no longer being captive to the often-deathly “reason” of the world.  Hail “the irrational season where love blooms bright and wild.” It is the irruption of the impossible.

The direction of human history changes because in a little town hidden on some ancient maps, in what would have been a completely inaccessible part of the world to anyone living on this continent, a young woman is visited by God and entrusted with living creatively toward God’s future amidst scorn, with risk, and in great hope. She takes this heart-stopping, life-altering, seemingly inconceivable development that opens up stunningly in the midst of her life, and responds to it as a gift from God.

Image:  Annuciation, by He Qi