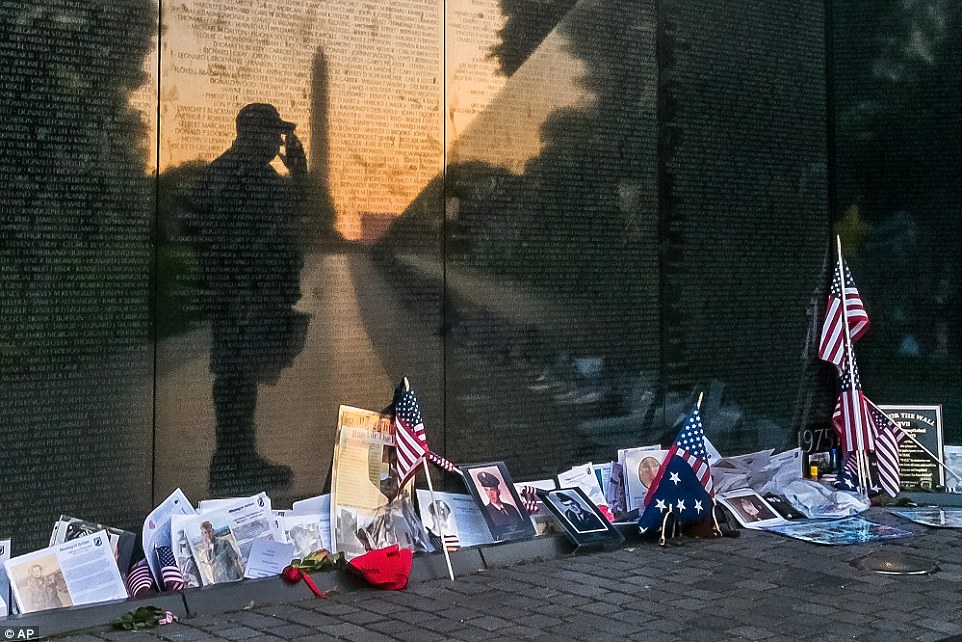 When you visit the Vietnam Veterans Memorial in Washington, you descend a pathway at the base of two black granite walls inscribed with the names of more than 58,000 American servicepeople who died in that war.  The two walls form a kind of broad “V,”  like wings, one pointing south toward the nearby Lincoln Memorial , the other northward almost directly at the Washington Monument.  The Memorial is set into the earth, and as you walk from either direction the height of the wall increases along with the number of names.  The site becomes a place of deep devotion and heart-rending reflection for those who enter.  People set flowers, pictures, and other items at the foot of the wall near the names of their beloved; poignant testimony to the preciousness of their lives. It is also common for folks to use pencil and paper to trace names from the wall.  One time, I paused beside two names that had been traced so many times that the stone was worn and shades lighter than the rest of the wall. Two so deeply loved!

As you descend the path about halfway, the city around you begins to disappear.  Only some tall trees remain visible, and to the north, the very top of the Capitol building beyond the Washington Monument.  It feels as though you are submerged in a vast rural field. And while, from the depths, you can see the Capitol dome, anyone on the Capitol steps would not be able to see you.  You, and those on the Wall, would be invisible to them, their view from one monument to another monument uninterrupted.

I am grateful for the very personal nature of the Vietnam Veterans Memorial Wall, and the way that,when you visit it, it feels as though God’s good earth and the lives of God’s children are opening to you, rather than being covered over. Anyone willing to venture down the pathway cannot remain untouched.

At Memorial Day we remember, personally, people who have died while serving in the armed forces of our nation. Memorial Day is not a church holiday.  Still, approaching it in the context of our faith and bringing the light of the gospel to bear may be a beautiful way of sanctifying our observance and honoring the lives of our dead.

We have known and loved these people–they have been our forebears, our parents and grandparents, our children, our siblings, cousins and uncles, neighbors, and even kindergarten classmates. Many, many have been people of faith. Those who have died have included immigrants,  people whose origins were elsewhere but served alongside our native forces. In our lifetimes, servicepeople have died in places like France and Germany, Guadalcanal and Okinawa, Korea, Vietnam, Cambodia, Laos, Grenada, El Salvador, Iraq, Afghanistan, Saudi Arabia, Syria, and Yemen.  In the years immediately preceding the founding of St. Andrew’s United Church of Christ, they died by the hundreds of thousands on this soil at the hands of fellow Americans.  If the names of those from the Vietnam War who died from war-related reasons after they came home were justly added to the Vietnam Memorial, the Wall would need to be at least twice as big.  We have many, and much, to re-member.

American Civil Religion would conflate the willingness of soldiers to die for country in war with Jesus’ willingness to die for us on the cross, and with his words to his disciples: “No one has greater love than this, than to lay down one’s life for one’s friends.” That is a regrettable distortion. Jesus was breaking the world’s endless cycle of violence and war-making and scapegoating. Jesus’ giving took no life; it harbored no revenge; it hated no one; it recognized that even self-defensive violence can alone never bring about peace.  Jesus was incarnating the peace of God in the midst of the world’s brokenness. He was embodying the transforming power of God’s love, and calling his followers to be willing to lay down their lives in the same manner he does.

Yet, if we can remove the holy veneer from war, I think we might behold the very real connections between our Lord and those whose lives we celebrate today.  Jesus did offer his own life vulnerably.  He practiced solidarity; he refused to abandon the poor, the weak, the rejected, the suffering, the vulnerable.  He remained faithful to his companions.  His witness required remarkable courage.

World War II vets fought against totalitarian, mass-killing powers seemingly hellbent  on world domination; the nation served the effort with them.  Since that time, literally dozens of wars have been fought, with far murkier reasons and motivations; our servicepeople left to navigate the moral straits and dilemmas pretty much alone, during and after. But their lives are worth just as much, aren’t they?

A Christ-centered approach to Memorial Day cannot celebrate war; we’ll leave that to those on the Capitol steps, for whom most of what is not monument becomes invisible. Faith is sorely tested in war, for war in its essence is sin. But that which is true will be eternal.  That which is born of love will never end. That which is good and honorable and life-giving blesses future generations. Bravery in the saving of life, the protection of the defenseless, love that vastly transcends self-interest: these remain.   And sins, while they are not to be excused, are forgiven. Would that many of these qualities, including conscience,  infect the larger populace!  Would that all peacemakers have similar dedication, discipline, and willingness to pour out life.

In the Spirit of Christ our remembrance extends  to all of the victims of war, their preciousness, and the grief of  their loves ones.  When Jesus prays to God that  his disciples “may be one, as you and I are one,” the communion he invokes is a foretaste of what God intends for the whole world and its people. Let’s think about what that means.

And as we receive the words of 1st Peter 4:12-19,  let us consider that they are meant not so much for our warriors as they are for those of us who are at home: being tested in our fidelity to Christ that we might become people of courage and integrity, protectors of the weak and vulnerable, tenders of the wounds of body and soul borne by our returning servicepeople, and learners of the awful lessons of war. So that the massive giving of life that we remember today might in the fullness of time become part of the woven fabric of peace.