The message, “After Darkness . . .Light,” is inscribed on the plaque next to the pool of reflection, where twin fountains of water rise upward from squares representing the footprints of the World Trade Center towers.  The 9/11 Memorial Garden of Reflection in Lower Makefield, Pa, is a beautiful, deeply moving experience for people who enter.  It has been constructed with loving care.  The names of all 2973 victims of the terrorist attacks are inscribed on glass.  People leave flowers, pictures, and other expressions of love and tribute.  The names of the seventeen Bucks County residents who were lost, including nine from Lower Makefield, are remembered on panels by the reflection pool. The garden is planted with maple and redbud trees in their honor.  People come each day, walking the paths, sitting on benches and underneath trees,watching the fountains of water rising from the depths of devastation like the spirits of those we have loved,  taking the opportunity to write their own tributes and reflections.  On the day after the eleventh anniversary of 9/11, I sat by the pool, reflecting on the meaning of forgiveness in the face of such awful violence and devastation, the mercy of the memorial washing over me.

To consider the practice of forgiveness as it relates to the events of September 11, 2001, is to enter highly charged and important territory.  Late this past winter, I was privileged to lead a “Transforming Power of Forgiveness” series with a wonderful congregation  in Chalfont, PA, a community about an half-hour ride from my home and a similar distance from Lower Makefield. The sessions were dynamic and generous, with participants exploring the presence and movement of  God’s liberating, healing “give-ness” in their own lives and our common life together.  To lead it was a joy.

Several weeks into our exploration, I raised the possibility that the principles and paths of forgiveness, and its life-changing power, are available to us in the midst of even the most devastating injustices.  I cited the example of 9/11, sharing the story of  a father whose son had died in the north tower of WTC in the initial attack.  Bob had visited our church and addressed the congregation in 2003, his  grief apparent and expressed openly to everyone.  What astonished us  was when this devastated parent said that although the perpetrators had done something terribly evil, he didn’t consider them “evil people.”  Instead, he humanized them, recognizing that they too came from families that loved them,and  communities that had nurtured them and cared about them.  He said that he had opposed the bombing of Afghanistan from the beginning, not wanting the same horror  that he and his family had experienced to be visited on Afghan families, and surely not in his beloved son’s name.  Once, when Bob and I were talking personally and I had raised the subject of forgiveness, he said to me, “Scott, I can’t even think about forgiveness yet.”  I thought to myself: “He’s already practicing it!”

At Chalfont I invited us to consider how the forgiving power we had been learning about might be  received and practiced in the face of such an awful event.    As forgiven people, how might we: (a) honor the claim God has made upon us (b) speak with a new truthfulness (c) and demonstrate an ongoing willingness to live in new ways with one another ? (Jones)  I knew that we would be stretched beyond our previous explorations.  But looking back at 9/11 and the ensuing years would give us opportunity to discern where this healing power had been engaged and where it had not, and to learn lessons that would help to shape our future.

I was encouraged by the substance of people’s offerings:

–One person expressed gratitude that President Bush had made a public statement  in the wake of the attacks saying that people of the Muslim faith were not our enemies, addressing the very real temptation to demonize in the face of loss.

–We discussed what was necessary in tending to grief with great care and attention, individually and collectively.  Taking time and practicing  prayerful patience would be essential elements in healing, as well as being manifestations of our faith.

–Another person spoke of the importance of understanding the grievances against our nation that helped perpetrate the events.  This was carefully distinguished from having such grievances become excuses for murderous violence.

–I raised the issue that it was 15 Saudi and 4 Egyptian nationals who had actually committed the crime (and that all had died in their acts of violence), but that in a matter of days U.S. forces were bombing Afghanistan, with the number of civilian dead there quickly eclipsing the casualty toll of 9/11.  Our ensuing discussion grappled earnestly with  what it means to respond to injustice in ways that offer protection and bring perpetrators to accountability, all while being accountable for our own actions and not compounding injury.

–The community of Nickel Mines, Pennsylvania, was lifted up as a concrete example of forgiveness practiced in the midst of horrifying tragedy and injustice.  In 2006, Charles Roberts entered an Amish schoolhouse, holding the occupants hostage and shooting ten girls ages 6 to 13, killing 5, before taking his own life. The grieving Amish community, including the families of the girls,  embraced the Roberts family: “The Amish quickly realized that Roberts’ family were also victims of the shooting.  Unlike the Amish, they had to bear the shame of having a loved one inflict such pain.” (Kraybill, Nolt, Weaver-Zercher)

Our discussion was quite fruitful and at the same time deeply unsettling.  We acknowledged the pain and discomfort in the air even as we engaged in life-giving discussion.   Reflecting on the fullness of our dialogue, I sought over the next week to articulate a response to the 9/11 tragedy (or a similar event) that would be grounded in the life of Jesus and in the forgiveness principles we had been learning. I presented this at the next session for our continued reflection and interaction.

(1)  Acknowledging the scope of the devastation. This would include: (a) moving immediately to meet the needs of those most affected (b) encouraging popular participation in the practices of compassion and solidarity (c ) leadership in  establishing multiple forums and settings for expression and articulation, for the processing of grief, and for the opportunity to receive comfort  (d) acknowledging and addressing the widespread trauma of having our long-held systems of meaning challenged (it was common in the wake of 9/11 to hear people say, “The world will never be the same.”)

(2)  The necessity of an assertive response to the injustice. Doing this well would involve: (a) framing all possibilities of action in ways that reflect our deepest values and identities, rather than having tragedy prompt an exception to those values  (b) ruling out all responses that victimize others  (c)  identifying perpetrators clearly and moving to hold them accountable for the clearly identified acts themselves (d) Relying on consultation with trusted friends and cooperation with other victimized parties.

(3)   Tending carefully to the processing of grief.  This is where the resources of faith community are indispensable.  Loss requires speech, the articulation of pain, including the language of rage.  The church has liturgical and narrative resources that can be engaged in community.  Walter  Brueggemann says: “Serious liturgical talk is an alternative to brutality that goes to the bottom of the poison.”  These liturgical and communal journeys hold the promise of transformation and new life.

(4)  Demonstrating an ongoing willingness to listen.  It is particularly important to listen: (a) to the grievances of those willing to articulate them without violence, and (b) to fellow victims and other concerned parties in a common future.  This is where patience and receptive communication are  critically important, and where dialogue resulting in common benefit can emerge.

(5)  Taking care not to become defined by the tragedy.  Steps 1-4 are all deeply important in preventing or addressing this kind of distortion.  For a number of years, it was very hard to identify any national strategies that were not framed in terms of 9/11.

(6)  Only do to others what we would willingly accept being done to us.  Jesus presents this as a core practice of Christian faith. While most all of us would express familiarity with the “Golden Rule,” its deeper ramifications are often not readily apparent.    How would we accept being treated when we, our community,  those close to us, or our nation,  have been terribly, terribly wrong?  Would we welcome retributive justice (i.e, revenge) against us and our kin, or would we hope for a restorative justice that holds us or those we love accountable while also offering opportunity for common healing and restoration?

The participants in my workshop were filled with faith and courage.  This was hard work, and such a framework is only the beginning.  But to risk an exercise where we run up against our own assumptions, fears, and limited perspectives, and entrust them to God, is no small matter.

The Garden of Reflection in Lower Makefield is itself a journey.  Initially, you enter a tear-shaped court in which you come face-to-face with wreckage from the WTC.  It is a gut-punch, and the ability it presents to touch it with your own hands can elicit all sorts of emotion.  The tear shape of the entryway acknowledges this and offers gracious invitation.   When you continue onto the bending outer walk, there are baskets of flowers you can draw from.You enter the Remembrance Walk, where the names of each of the 2973 victims is inscribed in panels of  glass:  each person precious, beloved, having been nurtured in family and community, their life deep and textured.  To run your fingers over their names is profoundly touching, but in a different way than the wreckage. I located the name of my friend Bob’s son, Bobby, and placed a flower in his panel. I remembered how Bobby’s grieving father reverenced Afghan families in a similar manner; the scope of remembrance grew for me.     Moving further down the path, it opens to the reflection pool, where you can sit quietly, pondering  and praying.  Larger panels inscribed with the names of the Bucks County residents face you from the other side.  It was the loved ones of  these residents who are primarily responsible for the Memorial Garden.

As I sat at the pool, I reflected on what forgiveness means eleven years later.  It indeed means that people have not forgotten, that the impact of the lives that are honored there continue to hold power to contribute to our future.  But where eleven years ago the smoldering wreckage would have been the predominant image of 9/11, we have now risked the distance of the journey, taking time to reverence  individual people and their substance, to extol the God-given beauty and wonder of vulnerable humanity even as we honestly lament the awful cost of violent ways.  Times of reflection, remembrance, and gratitude bring us to a reckoning with our own violence, and a desire to move more intentionally into a path of individual and communal healing. The streams of living water rising from the void are now the image that enfolds us.  The plaque that reads, “Beyond Darkness . . . Light,” is one that you encounter as you leave the reflection pool, only after you have moved through the heart-rending, intimate, beautiful, and honest stations of the journey.  The garden itself is a liturgy of healing and hope.

Among the loving details of the Memorial are forty-two luminaries representing the forty-two Bucks County children that lost parents on September 11, 2001. Even now, it is their future we shape, and the future of countless others like them.  Where the path of forgiveness  leads us is toward a future worthy of the precious ones lost on that beautiful, clear day 11 years ago, and of those who live in their stead.  “Forgiveness is an “invitation to the imagination,” says Christian Duquoc.   It is not forgetfulness of the past, but rather “the risk of  future other than the one imposed by the past or by memory.” 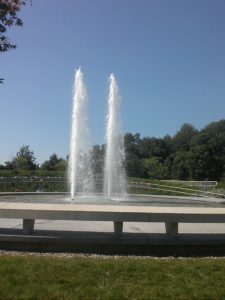